Construction on the Central Beach Phase III Flood Mitigation and Utilities Improvements project is nearly complete. Repaving of roadways in underway.
The project began September 29, 2014. It is the final phase of a three-phase project to reduce stormwater flooding in the Central Beach area. When completed, residents immediately will notice an improvement especially during heavy rain storms.

The Central Beach area of New Smyrna Beach encompasses the area south of Flagler Avenue bounded by Atlantic Avenue on the east, Second Avenue on the south, and the Indian River on the west. Project boundary map

Residents may be inconvenienced at times during the three-year project as underground stormwater systems are installed. Inconveniences may include road closures and detours. However, when completed, heavy rainfall no longer will flood the neighborhoods.


Work for this project includes:

The Central Beach Flood Mitigation Project is the result of flooding during a November, 2001 tropical storm.

The area received 12 inches of rainfall in 36 hours.

The estimated total cost to date of this final phase of the project is $8.8 million. The City will pay more than $5.9 for drainage improvements. More than $2.9 million in utility upgrades will be funded by the Utilities Commission. A Flood Mitigation Assistance Grant from the Federal Emergency Management Agency will reimburse the City $3.780 million for the drainage elements. The remainder will be funded by the City’s stormwater mitigation fund.

For more information on the project or upcoming meetings, please call the New Smyrna Beach Engineering Department
at (386) 410-2811 or Email Kyle Fegley.

Roadwork scheduled for the week of October 12:

Work on the Central Beach Flood Mitigation & Utilities Improvement Project This week, the project contractor will be working throughout the entire Central Beach area jobsite, focusing on repairs and cleanup, grading road shoulders, and cleaning up stock piled materials.

Temporary lane closures may be required.

For more info on the project, please visit http://www.cityofnsb.com/centralbeach . 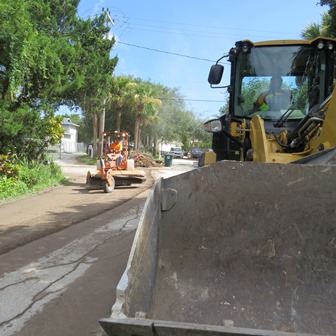